A few months ago I was sat at my vice pondering on the subject of “triggers”, those features of a fly that attract the fish’s attention. I then began to wonder how many triggers I could get on one fly. The pheasant tail nymph is a long term favourite of mine so I had a starting point. 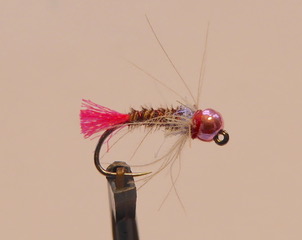 The hook can be any size from 18 to 12, my first attempt was on a #16 Partridge Jig with a countersunk 2.8mm tungsten copper or pink bead

Trigger 1. If you want to be posh you can use a slotted bead but a countersunk one works fine. I like to use red Bennechi 12/0 thread on pheasant tails for a reason which will be clear later on. Take the thread to the bend, tying in a red tail of wool, poly yarn or floss.

Trigger 2. Also tie in some fine red wire. Cut the tail quite short. Tie in 5 or 6 barbs from a natural brown cock pheasant centre tail feather. Wind the thread back to the bead building in a bit of a taper as you go. Wind the barbs to form a tapered body stopping a little before the bead. Cut off the excess feather and wind the wire in 4 or 5 open turns up the bead in the opposite direction to the body,

Trigger 3. Tie in the wire and worry off the surplus. Dub a little lavender Ice Dubbing onto the thread and wind a thorax between the pheasant tail and the bead,

Trigger 4. The next stage is to form legs with the barbs of a brown CdC feather using the split thread method. This is quite a tricky process at first and difficult to explain. The YouTube video of Marc Petitjean at the bottom of this description shows him tying a different nymph but the second part shows the split thread technique. He also uses it to include the Ice Dubbing at the same time. You can do this or just tie on the CdC you have previously dubbed on the thorax.

Trigger 5. stroke back the CdC barbs and wrap a collar with the red thread.